skip to main | skip to sidebar

After years of absense...I can hardly believe how time flies.....or how long it has been. 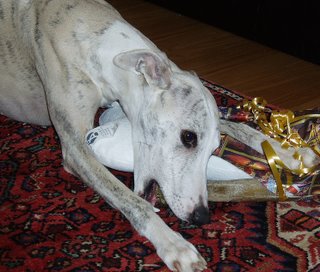 Christmas eve!! which is the same thing as christmas to a swede, in case you did not know....yeppers...christmas celebration in Scandinavia is today. Not that we are the earliest ones out...the Dutch have their bash on Dec 6!

Clara and I are celebrating with traditional swedish christmas dinner tonight at a friends place. Clara have started opening her presents as can be seen to the left...and my own present for myself was a brand new lap top so I can finally get back online here again!

And hey...lets not forget what christmas is really about....spend that extra time with friends and family this year, give an extra hug to those that need it. Send some money to an aid organsiation of your choice, buy that magazine the homeless guy outside the mall sells, smile at strangers and give the dog an extra bone...

Day 1
Crashed my car, totalled it on one of these middle of the road wires after having been taken over by an idiot who was obviously drunk or high , most likely both......everything went so fast that I did not have time to think. I just lost control over my car and next time I knew I was standing in the ditch looking at my car in surprise. I had Clara with me, and luckily we both escaped unscathed. Frightened, but nothing else.

Day 2
Went to the Bastard of all banks, explained my situation and begged. Finally after three days of fucking me around I got a smaller loan than I needed to buy a new halfdecent used car and in panic bought an old Golf Diesel turbo. A Golf Diesel would have been sufficient....as it showed. The turbo part has turned out to not be such a clever thing.

Day 5
Fucked the engine on the new old car. Yes, people. I had the car three days. Turns out that the people who sold it to me knew what they were doing. Turn sout that the yhad severely neglected the engine and in the end when the turbo blew they had just plugged it. This my friends...are possible to do.....and lasts for approx 100 miles or so....I was damn lucky and got almost 150 out of it!!
Sellers was not to be found- cellphone nr no longer in use....
Ok so, as everyone but me knows....turbo engines are to be avoided. a turbo can be changed and SHOULD be changed now an dthen, a renovated turbo are not hard to come by and reasonable in cost and I was still ok about it.

Day 6
Turns out that the whole engine is fucked - no go. Due to severe neglect by previous owners. Hunt for replacement engine begins.

Day 7
No luck. That particular engine is hard to come by- and friggin expensive if you do come by them.

Day 8
I fall ill with a sever strep infection, end sup in the emergency ward and faints on floor. Mostly due to late arrival since I have no car I had to wait a whole day until a friend gave me lift (no public transport out here in the turnip field).

Day 9 -15
Very ill - bad reaction on penicillin - infection gets waaaaaaaay worse and yours truly ends up in emergency ward on fluids and intravenous antibiotics.

Day 16
Back home, on strong antibiotics.

Day 22
Mechanic farts off up north ( of course) and me and Clara are camping with gran. It is the worst heatwave sweden has known in years and I feel like dying when going back to work after two weeks holiday. Yes people, holiday. After all, I work for DELL and would not want to jeopardise my employment by doing such a stupid thing as being home sick for a week. I like my work, and love the people I work with but my employer has a habit of firing people who "performs badly". To bad performance counts things like sever strepinfections.

Day 23
DELL starts an investigation into the source of all strepinfections since too many have fallen ill, and a lot of us have been hospitalized.
We are told that there will be no compensation in the form of paid sickleave or budget cuts.

Day 24
We are told that there are absolutely no causes for the strepinfections at the cantina ( no one ever suspected it) and that " it is impossible that it came from the AC because the air comes from the outside" - yes it does, however the temp in the system is 25C ( ought to be 18) and it is circulated......not to mention that people have been sick as dogs for the past six months.

Day 30
A month withouth a car to drive are celebrated by a troublesome busride through southern sweden from malmö home to vollsjö where we arrive 00.32. The lovely trip included lovely companions such as a totally wasted lady in her 60's that snored and passed gas loudly as well as Clara throwing up. Other passengers were clearly more annoyed with drunk lady than barfing Clara though. Always something :)

Day 32
Car is driveable....turns out the turbo on the replacement engine does not feel very well and decisions to send the other one from old engine for a complete renovation are swifty made. mechanic think I am nuts and wants me to get rid of the car asap. I explain that I am ´now so in debt over it that I cant. I have to keep fixing the odd bits until it can last me over the winter. Hopefully. The poor man , who has been working very hard and for very little money ( since he has a heart and feels sorry for me) just shakes his head and declares me mad.
I wash car and decide I hate it. However long I will have this car I will never feel comfortable driving it.
I realise my planned trip to Alabama this autumn goes to shits and are afrid I might loose a really good friend because of it. That saddens me.


Clara and I have gone for a short trip in the wretched fuck of a german nazi lemon down to the grocery shop and shared an icecream.

It is 23.00 and it is 29 C, that is more than tropical and I could definitely be without it. I long for three days of rain and the clear sky and fresh air that follows....

I guess the good news are that the crayfish in the creek will grown huge and that It will be fun going down there in August....always something...

Beautiful day. Soft warm autumn colours and a mild breeze whistling through the reeds by the pond.....I and Clara had a slouch midday nap/readtime on the patio under the last rays of autumn sun. My grandfather died today, or should I say passed away since he died peacefully during the night in his sleep. The Swedish expression for "passed away" are slept away. I am grateful for him passing in his sleep and that he found rest. He was very ill and any longer time with us here would have been agony, for us all but mostly him. I went to see him yesterday, on a whim. I even picked up my brother on the way and together we got grandma and we went to the hospice to see him all three of us. He was clear and happy to see us, even asked about Clara, and laughed at her having been in a fight with Irjas old cockerel who survived with broken tail feathers and a severely knocked ego. This was a good day to die as the old Indian would have said.......as strange as it sounds we have mourned him long and now we feel relief more than sadness. It was a blessing for my grandmother to know he is not suffering anymore and even more a blessing for us all that she can live her last time in peace. She has never known peace in her life and I am joyful that she now have the opportunity to know it.

Workwise life is going absolutely brilliant......I am one of the best performers in my team despite being the latest hire so I am happy. I could see the results in this months paycheck too and after three years of near ( if not in definite) state of poverty it is such a relief in mind and soul.....I have my life back. Never mind the wretched car needs a 1500$ fixer upper....I will handle it ...

The horses are moving to Irjas.....which is another peace factor in my mind and soul....my longest friend here...since 20 years...and also who I used to stable my old eventer with when I lived in Scania 15 years ago. It feels good.......Irja is a mum of two living with beloved husband Peder who in between working as an ambulance nurse finds time to build stables for my horses so I can have peace in my life......remarkable people and real friends...not pretend friends.........Claris are with Marita now. Happier dog has seldom been seen, I pick her up every night tired, filthy, stinking and deliriously happy. Life with four Labradors takes its toll....lol! I think the greatest thing for her is to see melker again.....melker who she grew up with and who she has known all her life. The catsters are cool....not yet decided wheter to move indoors or continue to roam the woods a couple of more weeks...they drop in for a snack now and then, occasionally napping in the breadbasket, but in a couple of weeks I know they will suddenly appear every moring to sleep away the day indoors rather than under the shrubs by the pond as by summer "mode".

Me, Irja, the kids, Isa and jens went to a small animals farmer market today, we tried to sell 12 of their ducklings but came home with a new chicken instead, plus ducklings. Clara was extremely interested by a beautiful Belgian Blue rabbit, much the same size as herself and much to our amusement a photographer from the local newspaper caught her in a moment of "rabbit/dog" contact. Hopefully it will make its way in the paper tomorrow! If it does I will post it here!

¨Well....that was all....I am in the midst of building a website of my own so plans are to simply move this blog onto that one and try update more often.......and in an easier way....
Posted by Systeryster at 14:21 4 comments:

well...actually two miracles.....first DELL called me about a job in Copenhagen....I nearly fell off my chair.....and was not far from having a heart attack. If I land a job like that my whole life will turn around.....so keep your toes crossed..and Jack...keep sending good thoughts.....it just might help...
second miracle....my beautiful beautiful kind mare are in foal.....so maybe luck has changed...... 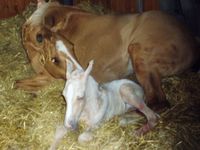 Not so decent folks